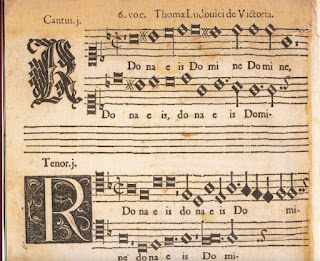 Posted by Falsettist at 16:47 No comments: 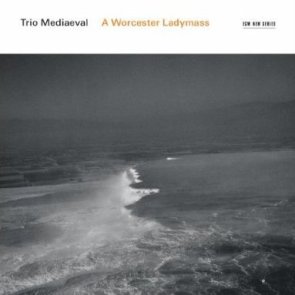 This new album from Trio Mediaveal is surely one of the most eagerly awaited of their career. Following their highly successful Folk Songs (2007), A Worcester Ladymass returns to the mediaeval sacred music with which these talented sopranos first made their name.

After wooing us with a deliciously slow Beata viscera on Stella Maris (2005), it is pleasing to hear more of the anonymous thirteenth-century English works often referred to as The Worcester Fragments. The Abbey of St Mary's Worcester was clearly a place of considerable musical tradition; and that so many musical manuscripts of the surrounding area survived the ravages of time and Henry VIII's best efforts to rid England of “popish ditties” says as much about their value to the faithful as it does the cost of the paper they were printed on. Many of these pieces were reused as bookbinding, rolled up and inserted into the spines of new books, or inserted into errant organ pipes to stifle unwanted ciphers. Yet these scattered remains are surely just a hint of burgeoning musical life in thirteenth- and fourteenth-century England.

Trio Mediaeval take particular care to point out that what they do is in no way an attempt to be 'authentic' in the old revivalist sense of the word. In fact the soprano Anna Maria Friman, an academic musicologist in her own right, talks of being engaged in 'an act of simultaneous preservation and re-creation' through their work. I agree; it is impossible to re-create the lost sound world of medieval vocal practice, because if we did manage an accurate reconstruction through guesswork we would never know. And then there is always the uncomfortable possibility that if we could know, we might not like the result. So Trio Medieval use imagination and guesswork to fill in enough of the unknowable performance factors to create something both attractive and functional. The huge difference between their album and many others like it is, of course, the high pitch.
Their sound is immediately alluring, something of the purity of their Norwegian (and Swedish!) voices combines with an almost flirtatious approach to blend. Never afraid to sound as though they are enjoying the music, their upwards transposition throws fresh light on the complex textures of these works. Compare, for instance, De supernis sedibus and Dulciflua tua memoria with the same recorded by The Orlando Consort (Amon Ra CD-SR 59). Although both recordings are absolutely excellent, there is something so innately joyful in the way Trio Mediaeval sing both of these works that just doesn't come across at men's voice pitch. The Orlando Consort sound far more reverential in comparison, simply because the complexity of this polyphony is more cluttered at a lower octave. Trio Mediaeval, therefore, offer something really different and quite arresting which is deliciously infused with their distinctive personalities.

By using these fragments to create a Ladymass they offer us a way to hear them that has liturgical significance. In creating such a programme they have collaborated with the composer Gavin Bryars, who has provided a new setting of the Credo and Benedicamus Domino texts. Bryars' works are beautifully crafted to both the voices and the mediaeval textures that surround them on the album. Skilfully avoiding a faux-medieval style, he blends seamlessly with the old music so that his ravishing harmonic injections provide the listener with many pleasurable shivers.

When performed live, the Trio's occasional use of chime-bars (Benedicta / Virgo Dei genitrix) is a welcome change of timbre but on this disc there is something unavoidably 'new agey' about it that I, for one, could live without. This is much amplified by the usual ECM imagery. For a record company that puts so much effort into stylish and contemporary packaging it never ceases to astonish me that they refuse to put the track listings on the back of the box; it is deeply irritating to have to prise the booklet out of the plastic hinge each time such information is required. The lack of Latin translations is also somewhat unusual since I feel sure listeners would have looked at them more frequently than they will the double-page spread of a desolate coastline. I worry that ECM are suggesting this is merely early muzak, and that we should disregard its message in favour of atmosphere alone. However, with recording engineering of such quality I am sure any gripes will quickly evaporate as soon as the play button has been pressed.

Fans of the Trio will not be disappointed, and those yet to discover their work should definitely allow these three sirens to lure their innocent ears into the rocky coastline of medieval England.