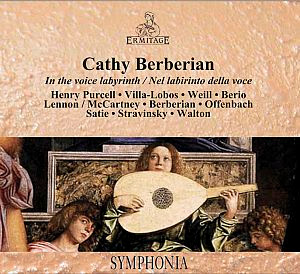 ‘It has been a great pleasure to revisit Cathy Berberian’s recordings,’ says EDWARD BREEN, author of this issue’s Icons feature dedicated to the mezzo and composer. ‘She was an incredible communicator in music from Monteverdi to Berio. I can almost taste the words that she sings.’

Cathy Berberian As far as is possible within the confines of these pages, Edward Breen explores the vocalist’s fascinating career – defined by eclecticism, experimentation, unorthodoxy and sheer chutzpah

To explore the work of Cathy Berberian (1925-83) is to gaze in wonderment at the versatility and creativity of the human voice. In the 1950s and ’60s she was in the thick of the musical avant-garde, fusing gestural utterances with traditional modes of singing to widen the aesthetic parameters of composition for solo voice. Her dazzling performances (which became known as New Vocality) inspired many composers, but she didn’t limit herself to Darmstadt circles; as Philip Clark wrote in this very magazine more than a decade ago, her career ‘relentlessly posed the question, “which avant-garde?”’ (3/06).

To read the full text of this article please visit www.gramophone.co.uk (March 2018)

Posted by Falsettist at 15:11 No comments: 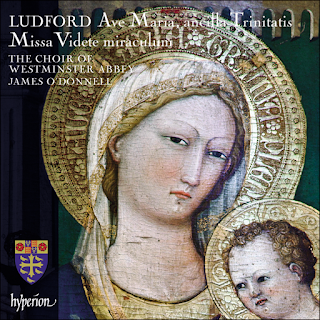 The modern reputation of Nicholas Ludford (c1490-1557) was really sealed by the first recordings of The Cardinall’s Musick in the early1990s (ASV Gaudeamus CDGAU131, 132, 133, 140). These pioneering discs transformed Ludford from being considered a bridge—linking Robert Fayrfax with John Taverner—to one of the most prolific composers of masses in Tudor England and a great pre-reformation musician. [...]

O’Donnell treads a conservative path through the richly textured Missa Videte miraculum. In the Gloria the Lay Vicars create a luscious, serene opening which the treble voices later expand into a full six-part texture.

The finest singing on this disc however, is undoubtedly Ave Maria, ancilla Trinitas: an exceptional work and a superb performance. The choir are heard at their finest in the more impassioned moments, of which this votive antiphon offers many.

To read the full text of this article please visit www.gramophone.co.uk (March 2018)
Posted by Falsettist at 15:02 No comments: 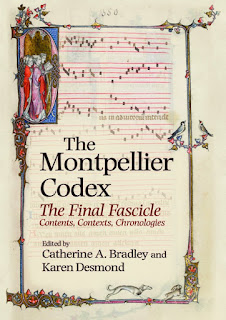 Chapter 16: A Performance and Reception History of

Fascicle 8’s motet On parole/A paris/Frese nouvele (Mo 8,319, fols. 368v—369v) is an intriguing polytextual work with an equally intriguing performance history. It has caught the imagination of many musicians who have explored the various performance possibilities suggested by the text.

The written personal communication of Thurston Dart offers a unique opportunity to understand how his performance of this particular motet was planned and executed in the late 1960s. It also suggests ways in which his opinion influenced some of the first performances to be recorded. ‘Make the music sound robust now and again’ was Dart’s advice to Michael Morrow and his ensemble Musica Reservata. Little did Dart know just quite how literally these young musicians would take him at his word. For Musica Reservata, On parole/A paris/Frese nouvele required an almost military approach to rhythmic drive resulting in a highly organised market-traders’ cacophony, whereas in Dart’s own conception this street scene unfolded across the newly available stereophonic soundscape of late 60s LP technology. As Emma Dillon explains, the attraction of On parole/A paris/Frese nouvele is that it ‘offers us a rare instance where the city itself is the topic of the motet’. [1] Through this urban prism Dart (re)constructed a vision of medieval Paris which made sense in his modern world and subsequent performances reacted to his historical imagination.

This paper explores the first four recordings of this evocative motet, with particular emphasis on the circumstances surrounding Dart’s much-delayed album, and probes the musicological climate behind each. With reference to the influential work of Yvonne Rokseth, it asks how much these performances say about the changing twentieth century sense of medieval and what they suggest about the changing musicological approaches to the famous Montpellier Codex itself.
[...] 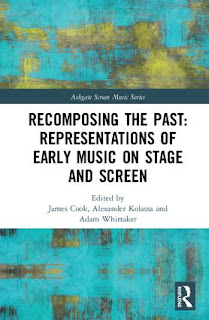 Recomposing the Past: Representations of Early Music on Stage and Screen
Edited by James Cook, Alexander Kolassa, Adam Whittaker
© 2018 – Routledge

‘It was known as “the Turkish nightclub piece” and he used to make it longer and longer in concerts and go redder and redder in the face.’ (Summerly, 2006).

Those were the words of James Bowman, countertenor in David Munrow’s Early Music Consort of London, reflecting on a recorded performance of a medieval dance: Istampitta Tre Fontane played by David Munrow (Munrow and Early Music Consort of London, 1973). Several television recordings of Munrow’s medieval dance performances survive and, combined with broadcast scripts and performer-interviews, they suggest a vibrant view of the Middle Ages based on the performance practices in folk and world music that he encountered on his travels. In particular, Munrow sought technical advice from the Middle-Eastern shawm players he met during overseas tours, and was inspired by the virtuoso clarinet playing of Mustafa Kandirali whose records he collected (Breen, 2014, pp.188-246). Munrow’s book Instruments of the Middle Ages and Renaissance (Munrow, 1976) makes explicit a theory that folk instruments from around the world serve as a template for understanding early instruments. Munrow was not alone in this reasoning, and he drew on research by Curt Sachs, members of The Galpin Society, and the work of early twentieth-century musicologists (Sachs, 1949; Baines, 1957; Wolf, 1918; Lavignac, 1922). Thus, a rich vein of musicological orientalism runs throughout Munrow’s two 1976 TV series, Ancestral Voices and Early Musical Instruments. In both of these, Munrow draws on ancient and folk instruments alike to trace the development of musical instruments though the ages. In particular, he traces the history of the shawm, the ancestor of our modern oboe, to its Saracen military origins. [...]