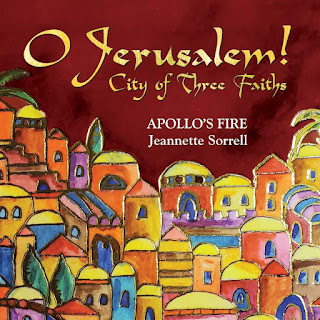 Etymologists trace a late fourth century transition from Jerusalem as the "city of peace" to the "vision of peace" (the term preferred by St Augustine). Likewise, this new programme takes its cue from the 13th-century Persian poet Rumi who described Jerusalem as "the place where everything is music... and brothers and strangers are one.” With a musical span from 1200 – 1650 director Jeannette Sorrell reflects the traditions of three faith communities, writing: "Throughout history, Jewish, Muslim, and Christian neighbours in Jerusalem have lived together, celebrating love and life, weddings and prayer." Her programme draws on their daily life, sacred and secular, organised into sections which explore each quarter of the Ancient city.
To read the full text of this review please visit www.gramophone.co.uk (March 2022)
Posted by Falsettist at 12:35 No comments: 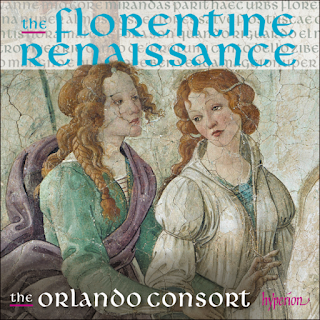 On this new album The Orlando Consort collaborate with musicologist Professor Patrick Macey on works by Dufay and Florentine music under Lorenzo de’ Medici including several premiere recordings.

The programme opens auspiciously with Dufay's motet Nuper rosarum flores (Garlands of roses) which can be seen both as a last great gasp for medieval isorythm, traceable back to Machaut, and also the apex of that tradition. Either way it's a grand and complex knot of symbolism honouring Pope Eugene and the dedication of Florence cathedral. Compared with Pomerium's recording (reviewed 10/97) which used a broader, choral approach or The Huelgas ensemble's (HMC 901700) instrumental support, the four solo voices of The Orlando Consort bring a brisk clarity to the textures, but the two interlocking plainchant voices fail to underpin the motet superstructure with the steady sonorities of choral singers or the grandiosity of sackbutts. The result is a beautiful, intimate performance which feels too delicate for the weight of symbolism it carries.
[...]

To read the full text of this article please visit www.gramophone.co.uk (February 2022)
Posted by Falsettist at 10:43 No comments: 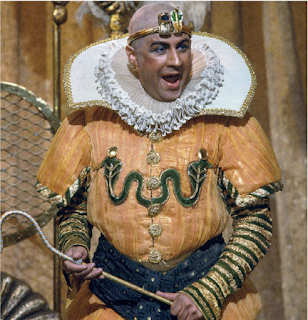 In celebration of James Bowman's forthcoming 80th birthday, Edward Breen looks back on a long and splendid career which established the countertenor voice in mainstream musical life.


For more than three decades James Bowman was the figurehead of the countertenor revolution: his discography spans Leonin to Britten and beyond, he has performed with crumhorns, sung about Eglantine and firmly obliterated any notion of the countertenor as a limited voice.

As a teenager I was first bewitched by his recital with the Ricercar consort: Cantate Ad Alto Solo, especially his performance of Vivaldi’s Vestro principi divino, RV 633 (04/93) with its smooth lines and stylish sense of rhythm. I envied his warm, immediate sound and tried in vain to emulate the evenness of his lower register. It wasn’t long before I heard him sing Britten’s A Midsummer Night’s Dream and I was captivated anew. Like those who discover new films through the work of a favourite actor, I followed James Bowman through the countertenor repertoire unaware that at the same time his very performances were defining new boundaries for that voice. Coming a generation after both Alfred Deller - who spearheaded the countertenor revival in England - and the impressively stentorian-toned Russel Oberlin in America, Bowman offered something more straightforward, joyful and, crucially, robust. Live and on record his energy and enthusiasm were palpable.
[...]
To read the full text of this article please visit www.gramophone.co.uk (Awards issue 2021)
Posted by Falsettist at 12:51 No comments: 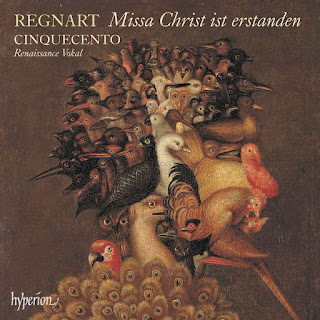 
Regular readers will know that I hold Cinquecento in especially high regard so it will come as no surprise if I open by saying that this new disc, their third to feature works by Jacob Regnart (c1540-1599), maintains their exquisitely high quality of both performance and progamme. The most famous of five musical brothers, Jacob (Jacques) Regnart was one of several Netherlanders to hold posts at the German Hapsburg court, and his music at times reminds me of the sonorous contrapuntal density of Gombert (c1495-c1560) but, as Stephen Rice points out, a much closer comparison can be made with Lassus (c1530-1594) both in terms of clarity of texture and especially when considering the variety and sheer quantity of output.

Missa Freu dich, du werthe Christenheit (Rejoice, O worthy Christendom) offers a more bewitchingly tuneful texture reflecting the longer phrases of its model. The gentle unfurling of the imitative Kyrie phrases are magical on this recording and listen out especially for a joyful countertenor moment in the Gloria at Qui sedes ad dexteram Patris (who sits at the right hand of the Father); it’s not called Ars Perfecta for nothing.


To read the full text of this article please visit www.gramophone.co.uk (Awards issue 2021)

Posted by Falsettist at 12:38 No comments: 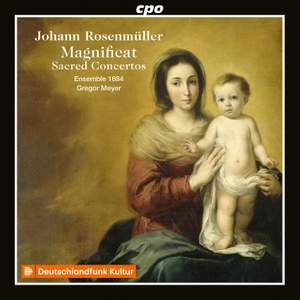 
To read the full text of this article please visit www.gramophone.co.uk (August 2021)
Posted by Falsettist at 18:28 No comments: 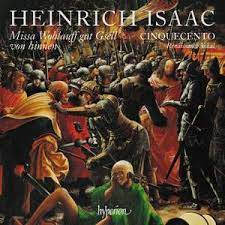 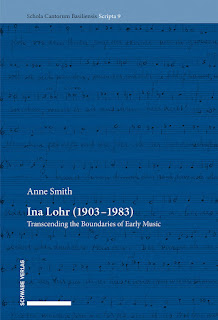 Smith Anne, Ina Lohr (1903–1983): transcending the boundaries of early music, Schola Cantorum Basiliensis Scripta 9 (Basel: Schwabe-Verlag, 2020), Edward BreenEarly Music, caab012, https://doi.org/10.1093/em/caab012
Published: 15 April 2021
Described by the composer Sven-Erik Bäck as ‘much more glamorous than her French counterpart, Nadia Boulanger’ (p.297), Ina Lohr is little remembered today. Yet she was vital to the musical life of Basel, in her roles as ‘co-founder and pedagogical inspiration for the Schola Cantorum Basiliensis and musical assistant to Paul Sacher, a major patron of contemporary music in the 20th century and conductor of the Basel Chamber Orchestra’ (to quote from the book under review, p.xvii). Anne Smith’s new biography is a rich and engaging study which does much to secure Lohr’s legacy.

Smith places Lohr’s musical activities within the context of other aspects of her family and spiritual life. As is often the case in...

© The Author(s) 2021. Published by Oxford University Press. All rights reserved.
Posted by Falsettist at 18:11 No comments: