Dowland: In darkness let me dwell 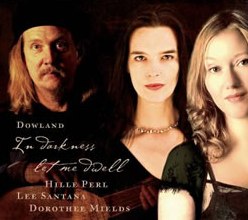 Possibly one of the most attractively packaged early music issues in recent months, this new CD of music by John Dowland is, according to the rather quirky liner-notes, a response to Sting's recent album of the same composer.  It's actually rather a clever ruse; first they thank Sting for bringing the repertoire to greater attention, then move on to say that since there was a 'slight discrepancy between his performance and how we think this music can actually function', they were inspired to record their own interpretations. I like that idea very much.

It is interesting that the artists also acknowledge a debt to Emma Kirkby since even in these post-revival times the influence of her great artistry resonates strongly in many of the young sopranos who make up our current early music tapestry. Dorothee Mields is no exception since one can immediately hear that she is much influenced by the holistic approach that Kirkby pioneered with The Consort of Musicke. Unfortunately Mields' biography is somehow lost-in-translation and she ends up being described as '…so extremely adequate for this music', but I think she is more than that, she is radiant and despite the slight flutter she gives to longer vowels her feminine sound and heartfelt approach are most beguiling.

The Sirius Viols are exquisite both as instruments (by Tilman Muthesius), and as an ensemble. Viols sound mournful to us by their very nature and their mellow tones infuse this whole album with many more shades of melancholy than the standard seven! Coupled with this audaciously beautify playing,  the Viola da Gambist Hille Perl and Lutenist Lee Santana are most sensitive accompanists and consort players with a robust and healthy sound. So, all in all, there is little to fault here and much to praise.

However, I am left with a nagging doubt about the overall impression this album creates. Had Dorotee Mields (if it is her) chosen not to include the spoken words 'From Silent Night…' then I might never have noticed, but she did and something about her delivery brought to my attention what was lacking. There is a very particular sense of misery in Britain, an underlying dissatisfaction that seems to pervade a lot of our culture and Dowland, despite his numerous travels, always strikes me as reaching right into the heart of this matter. Despite her obvious attempts to reflect this melancholy Dorothee Mields' delivery is just too well adjusted, too healthy and too continental for my tastes. As a technically agile singer with a pretty bloom to her voice she doesn't make songs sound laborious enough when I feel a sense of struggle might be appropriate. 'Flow my tears' for example, is just too accomplished and too deft to convey the full weight of the sentiment. That sense of internal (and vocal) torture that Sting had by the bucket-load feels muted in this 'response' and I feel what may have been over-done by Sting is now simply under-done by Mields.

In every other aspect it's a near-perfect album of outstanding musical performances but, for me, it's just not looking closely enough into that abyss of despair. Even the instruments are slightly short of this mark, despite their stylish 'The Earl of Essex his Galiard' their accompaniments can be too perky in the songs.

Having said that, this is so much more than just a stylish follow-up to a previous album and if only the listeners who were introduced to Dowland by Sting would now go out and buy this disc too then we might really be making serious progress as evangelists for early music. I fear that this disc will join the many other great recordings of Dowland out there that preach only to the converted, but I hope that's just my British sense of pessimism speaking.