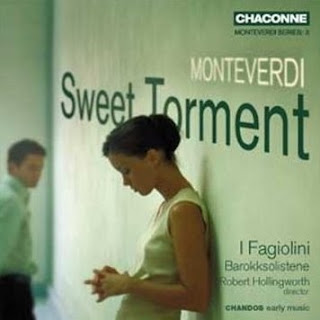 This is I Fagiolini's third release in their Monteverdi Series and, as always, the album is cleverly devised, well recorded and beautifully presented.

The programme opens with two madrigals from book five, the first of which, Questi vaghi concenti uses almost the whole I Fagiolini ensemble (voices and plucked strings) in conjunction with their colleagues from Barokksolistene (bowed strings); then the second, T'amo, mia vita!, employs a delicate soprano solo in alternation with four voices and continuo. These are followed by two astonishing settings of Petrach's poetry from the sixth book of madrigals Ohimè il bel viso and Zefiro torna, e'il bel tempo rimena. Petrarch provides a huge inspiration for both Monteverdi and I Fagiolini as the singers really excel in these unaccompanied five-voice textures which allow them to demonstrate a skilful balance between ensemble and soloistic expression. The following setting of Zefiro torna, e di soavi accenti (Scherzi musicali ...1632) for two tenors and a stirring ground bass played by the wonderful continuo team marks the start of three outstanding solo pieces with Ohime, dov'è il mio ben (seventh book) a lament for two female voices and a simple strophic song Si dolce è 'l tormento for tenor. This last song is probably the most arresting track on the album; Nicholas Mulroy is outstanding as the soloist accompanied impressively by Eligio Quinteiro (chitarrino) and Frances Kelly (harp).

Three madrigals from book eight form the second half of this programme. Or che 'l ciel e la terra returns to the poetry of Petrarch and contains some of the most ravishing music as each of the affetto is explored and the ending is absolute genius - executed with typical panache by I Fagiolini. Following the military humour of Gira il nemico insidioso the impressive Ballo delle Ingrate closes this album with, again, almost the full forces of the collected musicians.

I Fagiolini are more successful than most English ensembles at casting off the Oxbridge veil that early music performers once spent so much time cultivating, and they actually describe themselves as a solo-voice ensemble rather than a chamber ensemble. However, there were times when I was not entirely convinced that they were completely comfortable with being so extrovert and this tended to be where the need for ensemble and expression came into conflict. However, the overwhelming majority of their performances left me with very few qualms and the instrumental playing was consistently excellent.

By exploring works that move the emotions of the listener I Fagiolini present a sumptuous selection of madrigals which demonstrate both the huge variety of Monteverdi’s musical language and the flexibility of their artistry. Even with so many recordings of Monteverdi’s works now jostling for our attention, this new release from I Fagiolini is highly desirable and reinforces what an exciting project their Monteverdi series has been so far.