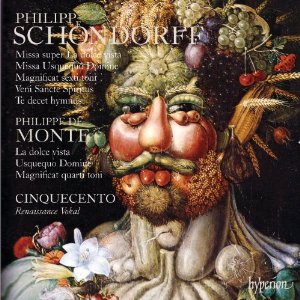 Originally written for musicalcriticism.com
30 May 2011

Cinquecento are once again brilliant, sensitive and convincing. And yet their sixth album poses a delightful problem: that they appear to have the Midas touch with renaissance vocal polyphony somewhat complicates the ease with which we can form an opinion about the quality of the compositions they perform. As this ensemble continue to mine the lesser-known recesses of the sixteenth century, it is left to us listeners to probe beyond their beautiful performances and decide for ourselves if this music is merely formulaic mush, or the works of a composer that deserve to be remembered.

Musicologists, and indeed critics, are notoriously reluctant to discuss quality in early music. Even when we do have value judgments from contemporary writers it is hard for us to map them on to the works in question, as too often lines of argument are enmeshed in concepts and contemporary beliefs drawn from their own understanding of the ancient world. Period taste, as it were, looks set to remain just that: period.

Turning from issues of quality towards those of quantity, evidence for Schoendorff’s status as a ‘minor composer’ in his own day is rather obvious, even if I do dislike the term; his output is small. There are just two masses, a magnificat and a handful of motets that, considering his 30 years at the imperial court, suggests the three Kings were not beating a path to his door to beg for more works. Is it going to far to suggest that on this basis alone Schoendorff was just a trumpet player from Liège with more technique than inspiration? Well actually I think that would be jumping to a hasty (and wrong) conclusion.

The complicating factor is that Schoendorff’s short life occupies a problematic period for the Habsburgs. When Maximilian II died in 1576 his power transferred to his son, Rudolf II, who kept on his father’s musicians under the guidance of the much-respected Philippe de Monte. Within years, de Monte was in poor health and considering resignation. His court musicians were not only restricted by the developments of the Council of Trent but also with Rudolf’s disinterest in long elaborate service music. Had times been different, who knows how a figure like Schendorff may have flourished?  As it is, the music that he did write, although necessarily brief, suggests a healthy interest in career progression, since his 1587 Missa super La dolce Vista is both dedicated to his monarch and parodies one of his boss’s own Italian madrigals. Double flattery if you like.

On this recording, de Monte’s original madrigal is sung with a light and reflective character which is at once fond yet knowing. The subtle eroticism of “…dying for her a thousand times each day”, is not lost in either de Monte’s setting or in Cinquecento’s performance. The mass they sing with much more authority, providing a pleasing and subtle contrast. It is a short setting, much more so than de Monte’s own parody of the same material. The syllabic nature of Schoendorff’s score and use of the six voices in groups of two, three or four allows for some telescoping of the text as phrases overlap. This suits Cinquecento’s careful style and offers a chance for the listener to enjoy the individual quality of the voices as they appear in differing combinations.

In de Monte’s setting of Usqueqo Domine oblivisceris me? it is suggested that we hear something of the older composer’s discontent both in his choice of psalm 12 (How long Lord, will you forget me, forever?) and in his plaintive, pleading setting. Cinquecento make a larger, fatter sound in this music, which feels particularly expressive, and they display an enviable ‘nose’ for those many subtle madrigalian traits that are characteristic of de Monte’s polyphony.

Schoendorff’s mass setting of this motet is, surprisingly, bigger and less efficient than his Missa super La dolce vista. In many ways this more indulgent style suggests that Schoendorff had the ability to go much further as a composer had he wished. The expressive use of homophony is particularly skilfully executed by Cinquecento.

With a Magnificat and two other motets to hear it turns out that Schoendorff is well worth the discovery, as are Cinquecento if you haven’t already.  This is an album well worth looking out for and with such a great repertoire to explore there will be plenty of opportunity to hear more of this ensemble in future I hope.