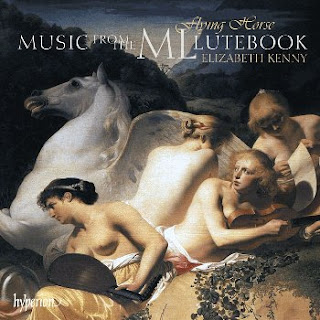 Volumes of music that contain many different sources of handwriting as well as short pieces written in the left-over spaces at the bottom of pages often convey clues as to their owners and the history of their usage. MS 38539 in the British Library is just one such volume and it is from this interesting collection that Elizabeth Kenny has compiled her latest programme, Flying Horse.

The manuscript has a fascinating history but one which is not easily forthcoming. For many years is was thought to be related to the composer Matthew Locke since the cover bears the initials ML. However, since the dating of the manuscript has disproved this theory it became known simply as the 'ML Lutebook.' As Elizabeth Kenny explains in her notes, it contains a few doodles of the name 'Margaret' that suggests it was compiled for the private performance of a lady and she may have passed it on after marriage further indicating that some of the pieces may have been intended for 'Margaret's' lute lessons, and so a picture begins to build. Whatever the story it is a fascinating volume and one that charts an interesting point in musical history for lutenists, as Kenny says 'wondering where they had collectively ended up after the confident Golden Age of the Elizabethan lute.'

The programme begins with The Battle Galliard by Dowland which is also known as The King of Denmark's Galliard in another source. It's a rousing piece, which Kenny plays with an immediate and energetic style, and it is one of four Galliards on this album including Dowland's beautifully complex A Gallyard Upon The Gallyard Before which is based upon A Gallyard By Mr Dan Bacheler and the anonymous The Battle in which Kenny finds many textures and colours which belie the soft nature of the lute. A collection of Pavans include three pieces by Robert Johnstone, two of which are dark melancholy works using the lower lute strings to great effect. The third by Johnson, in F Minor, is a fascinating piece in which Kenny plays some elegant divisions from Herbert Cherbury's Lutebook. Courants also appear in this programme with their sprightly rhythms first taught by the French dancing masters. It is easy to see why the form became such an obsession since they are so tuneful, a quality that Kenny brings to the fore in her playing.

Finally, the group of Tunes and Grounds is the most instantly appealing on this album. Full of old favourites such as the delightful John come kiss me now and other well-known pieces from the theatre like Gray's Inn Maske. These tunes punctuate the programme with more familiar reference points for those unfamiliar with the lute repertoire and provide a delightfully interesting comparison with counterparts in other collections.

Kenny is one of those exciting performers who is also an academic in her own right. Not only is she Head of Early Music at Southampton University and a professor of Lute at the Royal Academy of Music but she is also a principle player with the Orchestra of the Age of Enlightenment and a regular collaborator with Les Arts Florissants and Concordia. This solo recital disc stands as a really fascinating exploration of an important musical manuscript but is also one of the best solo lute recordings that I have heard.  Excellently programmed and beautifully recorded it showcases Kenny's virtuosic skills and sensitive playing without compromising the sense of intimacy that much of this lute repertoire seems to demand. I am a little disappointed that the booklet notes, which are otherwise excellent, did not include details of the instrument that Kenny plays, but the amount of other information provided on the music more than makes up for that small oversight. This album comes highly recommended.

Posted by Falsettist at 21:39 No comments: 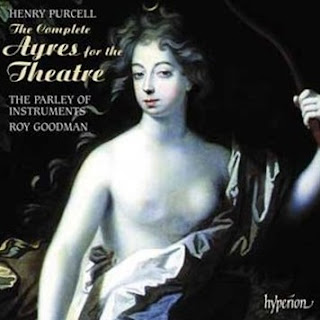 The Parley of Instruments Roy Goodman (Hyperion CDS44381/3)
Posted by Falsettist at 21:37 No comments: