Recording of the month: Anamorfosi 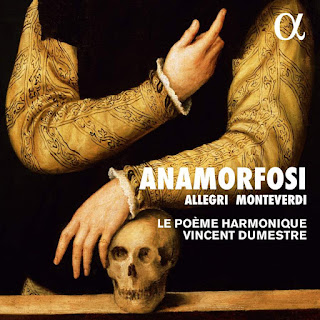 
In Kafka’s Metamorphosis Gregor Samsa may have woke up one morning to find that he had been transformed overnight into a giant insect, but in the story of music history there are few such hard-borders. In fact, it’s pretty much one long slide from beginning to end. On the way there are famous moments, nodes that define a style, but even between seemingly opposed categories there is often a veritable riot of frictionless trade. This is a programme which delves deep into the slippage between sacred and secular through a host of exquisite works appropriated and transformed for counter-reformation interests. The title, Anamorfosi (Anamorphosis) is drawn from the visual arts, a deliberate distortion that requires the viewer to occupy a particular perspective or vantage point. In short, this is one of the best programmes that I have encountered in recent years both in concept and execution and it begins with an icon of early music, Allegri’s Miserere.

This superb Miserere performance sits alongside lesser-known and rather ingenious contrafacta. These are works which were originally secular—madrigals and dramatic recitatives—pieces which, in short had already become famous in their original contexts before being transformed by swapping in a sacred text as the church harnessed the power of the very music of actors and theatres that it sought to suppress. An arresting example of this comes from mezzo soprano Eva Zaïcik who gives an absolutely gripping performance of Luigi Rossi’s (1597-1653) Un Allato Messagier, a poetic lament on the death of Christ which was formed by an anonymous author who re-texted Rossi’s ‘Lament of the Queen of Sweden on the Death of her Husband’ (Un ferito cavalier). Of the sacred counterpart I have long admired Suzie Le Blanc and Tragicomedia (Challenge Classics 2001) for their crisp intensity and here, in this sacred re-working, Zaïcik maintains a similarly crisp edge to her mourning but constantly undercuts it with deeper, purpler hues. Much encouraged by the superb instrumentalists this is a performance all enthusiasts of Roman cantatas will find spellbinding. Followed by Monteverdi’s mesmeric (1567-1643) Si dolce è'l martire (a re-texting of Si dolce è'l tormento) with a sparklingly bittersweet performance from soprano Deborah Cachet, the genius of the programme is clear by the third piece.

To read the full text of this article please visit www.gramophone.co.uk (Nov 2019)

Posted by Falsettist at 13:38 No comments: 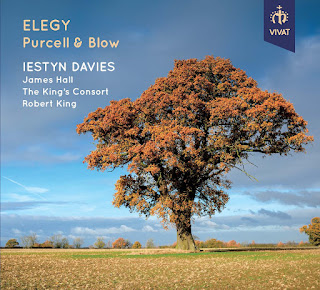 This latest disc from the King’s Consort on the independent label Vivat is absolutely on point: with two wonderfully matched countertenors and superb recorder playing bound together in the intimate acoustic of Alpheton New Maltings, Suffolk there is much to enjoy here. The big draw is, of course, countertenor Iestyn Davies and for me his performance of Purcell’s O Solitude is a clear stand out. Davies sings the entire song in falsetto maintaining his tone’s silvery thread through even the most fiendishly low passages. His word painting is nuanced, subtle and intimate. Paired with the deliciously warm tone of Reiko Ichise’s bass viol, the cushion of the chamber organ and Lynda Sayce’s ever-sensitive theorbo this is surely one of the best countertenor performances on disc rivalling even perhaps King’s previous account with James Bowman (Hyperion King3).

The duets, sung with James Hall are superb throughout, carefully balanced and well controlled, although perhaps too modest for my tastes: consider the opening duet: Hark how the songsters, which shies away from the sheer giggly joy of the recent improvisatory performance by L’Arpeggiata (Erato 2564633750). This is also the case in Sound the trumpet, that most famous of countertenor duets, the emphasis here being more sprightly than extrovert. It lacks the grandeur of King’s earlier Bowman/Chance pairing, especially on the opening long notes (Essential Purcell, Hyperion KING2) but compensates with nimble energy. Hall is certainly a voice to listen out for and he contributes many ravishing moments to this disc.

To read the full text of this article please visit www.gramophone.co.uk (Nov 2019)
Posted by Falsettist at 13:42 No comments: