Allegri's Miserere and the Music of Rome 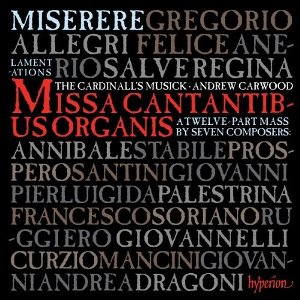 Allegri's Miserere is today one of the most famous and recognisable pieces of music from the sixteenth century, yet, as with all of Andrew Carwood's ventures, there is more to this programme than meets the eye. Many discs have borne similar titles over the last twenty or so years, but none come quite so close to resembling a plot by Dan Brown as this one.

The majority of this disc is given over to Missa Cantantibus Organis, written by seven Roman composers using themes from Palestrina's motet of the same name. The motet should be well known from James O'Donnell's recording with Westminster Cathedral Choir in 1999 (Hyperion CDA 67099). The mass, a joint effort between Stabile, Soriano, Dragoni, Giovannelli, Santini and Palestrina himself, is available on only one other album that I know of—with Wilfried Rombach's ensemble Officium (Christophorus CHR 77288)—so it is wonderful to have another performance of it here. And, what a great performance this is.

I've written before about the expressive and rich sound of The Cardinall's Musick in their Byrd recordings, but here they create a more ceremonial air. This is, after all, polychoral music written to impress. The large wedges of sound from each of the three choirs show a keen sense of dialogue under Carwood's direction yet, given the way that mass sections are by different composers, there is a surprising unity in this piece too. These seven composers were all high-ranking maestri in Rome, in contact with Palestrina and members of the Vertuosa Compagnia dei Musici di Roma as Carwood explains in his excellent notes to the disc.

Naturally, Palestrina's motet is also recorded on this disc, as are some lesser-known works by Allegri. De lamentatione Jeremiae prophetae scored for SSAT are particularly beautiful and extremely well sung, with 'dream team' sopranos Carys Lane and Rebecca Outram enjoying some ravishing phrases.

I am, however, slightly perplexed by the presence of Allegri's [in]famous Miserere. As I said earlier, it is only obvious that Andrew Carwood would record it at some point, and very beautiful it is too, with dazzling high Cs from Amy Haworth. It will certainly sell many records and rightly so; even if the plainsong is disappointingly heavy weather. But why choose to record this hackneyed version? Even back as far as 1993 Hugh Keyte had realised something was amiss and his early work on reconstructing the piece was recorded by Andrew Parrott's Taverner Choir. More recently (2002) the Paris-based Ensemble William Byrd directed by Graham O'Reilly recorded a nineteenth-century manuscript in which the castrato Domenico Mustafà had committed to paper what he could remember of performances by The College of Papal Singers before the Risorgimento of 1870. This version is a hybrid of the original work by Allegri with that of two other composers; and one can compare earlier sources to make it clearer what is and isn't Allegri's original music.

What we usually hear today is not only harmonically out-of-character for the time (as Carwood notes) but apparently a misunderstanding by the musicologist William Smith Rockstro working in 1880. What we hear on this recording, therefore, is something that we know isn't quite right. Does that bother the listener? Judging by album sales on similar recordings, no; it doesn't bother listeners at all. This current version of the Allegri has found a rather prominent niche in the early music canon and won't be shifted that easily. But whilst I'm enjoying hearing it, I cannot really mask my disappointment at an opportunity missed to broaden the debate. The Cardinall's Musick are one of the very best groups out there at the moment in my opinion, and I was hoping they would wade into this quagmire and offer us something new to chew over.

In summary, apart from my musicological grumble, this is a really fine disc with some beautiful performances. It's also one of the nicest cover designs from Hyperion that I've seen for a while so there is much to celebrate here, as ever.

Posted by Falsettist at 22:06 No comments: