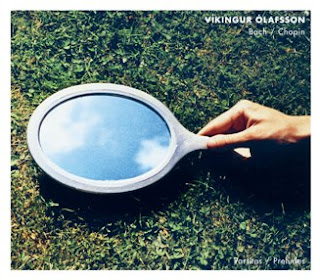 Posted by Falsettist at 22:18 No comments: 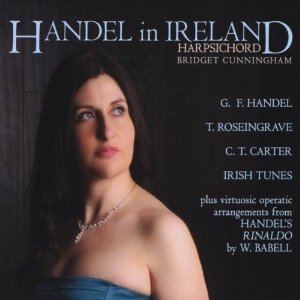 Bridget Cunningham's first solo harpsichord album is her second disc on the young Rose Street Records label to explore early Irish themes, this time through Handel's stay in Ireland from 1741 to 1742. The programme is built around two works by Handel, a keyboard arrangement, probably his own, of the overture to Esther and the seventh suite in G minor. There is are also a suite by Roseingrave, a Sonatina by Carter, and two virtuosic arrangements of arias from Handel's Rinaldo by Babell. The disc finishes with two bonus tracks of Irish folk tunes known to Handel, one of which he wrote one out in his Messiah manuscript and which is previously unrecorded.

The disc begins with Babell's reworking of Vo far Guerra, which, to the best of my knowledge, remains unpublished and which Cunningham plays directly from a facsimile of the manuscript. It is an astonishing thirteen minutes long, which, when you consider the original aria is about five minutes, gives some indication of just what is meant by 'virtuosic'. Despite its length, no one could accuse Cunningham of playing slowly, far from it: technically she is dazzling, passing through the many arpeggiated passages and cadenzas with seeming ease. There is humour in this arrangement and in Cunningham's performance too; his huge chords at about 6'30" and her timing of the various sections leave the listener with the impression that this is a celebration of a much-admired aria rather than a simply showy arrangement.

This first track sets a precedent for the whole album which could be summed up as a heady cocktail of fondness and resonance. These are clearly much-loved works which Cunningham communicates in the care she takes over her performance, but, more than that, her playing really makes the harpsichord sing. This is particularly noticeable in Handel's seventh suite, the Allegro of which she plays with the manuals coupled. So many times one hears lumpen and awkward performances of such busy music, but not here, the resonance of her playing, the instrument and the recording combine to capture that illusive 'singing tone'. Magical.

Cunningham plays a double manual Blanchet copy of Ruckers by Wooderson 1996 and a double manual Blanchet copy by Goble 1988. The bonus track 'Aileen Aroon', which one famous anecdote relates that Handel wished he had composed, also includes a baroque harp made by Waghorn. The booklet draws on her published research into Handel's period in Ireland.