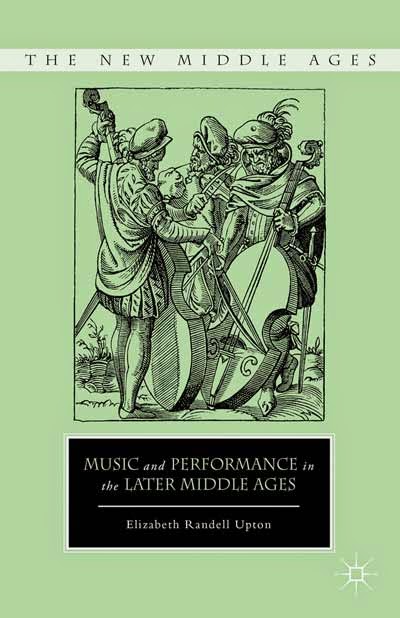 Elizabeth Randell Upton, Music and performance in the later Middle Ages, The New Middle Ages (New York: Palgrave Macmillan, 2012), £61
It seems that a rich, reflective phase of scholarship on medieval culture is upon us. The medievalist audience at large will have already detected its presence running through the series The New Middle Ages, edited by Bonnie Wheeler and published by Palgrave Macmillan, but readers may be less aware of how such developments are unfolding in musicological spheres. In musicology, the approach of The New Middle Ages shows clear signs of cross-fertilization with other recent movements such as sound studies (see The sound studies reader, ed. J. Sterne (London, 2012)) and the new cultural history of music (see The Oxford handbook of the new cultural history of music, ed. J. Fulcher (New York, 2011)), resulting in ‘thickly’ descriptive essays that seek balanced dialogue between positivist approaches and more interpretive and cultural sensitivities. That such new work frequently invokes a breathtaking expanse of interdisciplinary knowledge is testament to generations of careful archival excavations and subsequent digitization projects that form the bedrock of today’s research. If this current reflective phase is the first fruit of our brave new database-driven world, then it may be useful to view these studies as the first dividends of some very shrewd online investment by the academic community.

Music and performance in the later Middle Ages by Elizabeth Randell Upton is a good example of such interdisciplinary richness. Characterized by a subtly provocative stance delivered through wonderfully lucid and highly enjoyable prose, it is unquestionably a branch of Palgrave’s New Middle Ages family tree. Upton’s overall aim is the re-examination of two manuscript collections—the Chantilly Codex (Chantilly, Musée Condé 564) and the Oxford manuscript (Bodleian Library, Canon. Misc. 213)—to include the viewpoints of performers and listeners, as well as a traditional compositional perspective. In so doing Upton spins an ornate interdisciplinary …

For the full text of this article please visit:
http://em.oxfordjournals.org/content/early/2014/07/31/em.cau105.extract

Posted by Falsettist at 12:47 No comments: