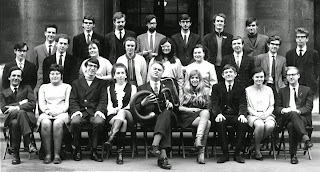 Written for King's College London: A new biography looks back at the department of music's founding year.

The world’s first music degree was awarded by Cambridge University in 1463, but it was not until 1903 that degrees in music were given at London University, and not until 1908 that a part-time King Edward Professor of Music was appointed at King’s College, London. The chair was endowed by a gift of £5,000 from Trinity College of Music in 1902; sufficient to draw a salary from the interest. There were no teaching staff and no faculty but, rather, a Board of Studies in Music overseen by the Faculty of Arts. In 1964, that Chair became a full-time position and the Faculty of Music was created. Thurston Dart was appointed as Professor and he began teaching with just three other staff. It was no coincidence that this development happened in the wake of two groundbreaking reports on education—The Newson Report and The Robbins Report—which questioned the very foundations of the British education system and, in the case of the latter, called for an immediate expansion of the number of universities. In turn, these reports ignited a long debate over what constituted a university music education and with this in mind Dart was keen to situate himself and his new faculty as different from a music-college education.


The influence of Dart’s faculty was not limited to King’s College since he had to plan on a London-wide basis because his Chair oversaw music examinations across the whole university. Any change to the existing regulations would affect all music exams including those taken at teaching colleges, and as such the idea of a new approach was not met with universal acceptance. Dart understood this challenge as an opportunity to renew the entire music degree and its regulations ‘from bottom to top’. Change was swift: by 1967 the new Faculty had a full quota of sixteen undergraduates, and Dart could report that fifteen candidates applied for every position offered. Ten postgraduate students were also present as well as over forty students from London music colleges who attended faculty-lectures on a part-time basis. At this point, the entire operation was still run out of 34 Surrey St, a building of just 1300 sq ft  (121 Sq M) originally intended to house the new faculty for a single year but which continued in service until 1969 when the Music Department was moved to a converted shop-building on The Strand.

To mark the fiftieth anniversary of the faculty of music at King’s College, London this essay offers an overview of Thurston Dart’s life, his development as a musicologist and his appointment to The King Edward Chair in Music. It outlines his ‘newlook’ approach to music education for the University of London and explores why it was so different from the traditional approaches taken by other faculties.

David Munrow (of the Early Music Consort) and Folk Music

David Munrow (1942-1976) was one of the most widely-known early music ‘personalities’ of the 1960s and 70s. He was a woodwind specialist and director of the Early Music Consort of London and also a prolific broadcaster. As a regular BBC presenter many knew him through his long-running radio series Pied Piper which was aimed at a younger audience but enjoyed by listeners of all ages. Over the course of five years and 655 programmes he discussed a huge range of music themed in four weekly installments that ranged from folk dances to the works of Berlioz.
Having studied Munrow’s recordings, broadcasts and writings over the past few years I have become interested in what first sparked his interest in folk music and folk instruments, and how, in turn, this influenced his performances of medieval music. The following blog-post is offered as an overview of his activities and connections in this area.


For the full text of this article please visit: http://bit.ly/1HWXxN3
Posted by Falsettist at 16:01 1 comment: