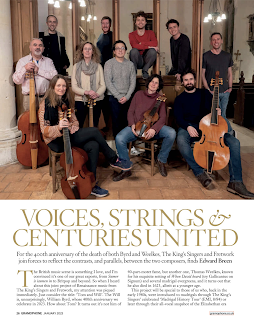 For the joint 400th anniversary of Byrd and Weelkes in 2023, The King’s Singers and Fretwork have joined forces for a new album whose programme reflects the contrasts, and occasional parallels, between these two composers, finds Edward Breen

I love the British music scene and am convinced it’s one of our great exports, from Sumer is icumen in to Brit Pop and beyond. So, when I heard about this joint project of Renaissance music from The King's Singers and Fretwork, my attention was piqued immediately. Just consider that title: ‘Tom and Will’. The Will is, unsurprisingly, William Byrd whose 400th anniversary we celebrate in 2023. How about Tom? It turns out it's not him-of-40-part-motet fame, but another one, Thomas Weelkes, known for his exquisite setting of When David Heard and several madrigal evergreens, and it turns out that he also died in 1623 albeit at a younger age.

This project will be special to those of us who, back in the early ‘80s, were introduced to madrigals through The King's Singers' celebrated ‘Madrigal History Tour’ (EMI, 1983) or later through their all-vocal snapshot of the Elizabethan era ‘The Golden Age’ (EMI, 1995). Their clear, fresh sound was hugely skilful but presented with a light touch which helped bring this nuanced music alive. Crucially, they sang madrigals with more obvious humour than others had before them. Like so many early music enthusiasts, I also remember Fretwork's ‘Goe Nightly Cares’ (Virgin 1990), an album of Byrd and Dowland with Michael Chance giving arguably some of his best performances: the thrust of those Galliards, the sinewy sounds of their instruments, the clear soaring falsetto tone! The melancholy was so visceral that even now the mood of that pitch-perfect programme still lingers in my memory. It is therefore with some joy that I anticipate this new collaboration: it's a musical partnership that has been waiting to happen for some time.

[...]
For the full text of the article please see Gramophone magazine (January 2023)

Posted by Falsettist at 20:33 No comments: