Music from the reign of King James I 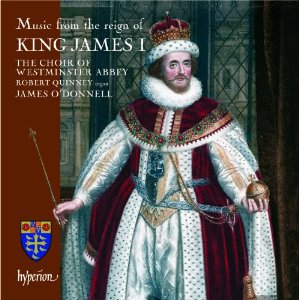 Music from the reign of King James I explores works by composers with links to both the Chapel Royal and Westminster Abbey, and whilst not all the music on this disc would have been sung in the Abbey during King James' reign, it would have most likely have been performed by musicians connected with the Abbey. The programme begins with an extremely attractive selection of verse anthems by Thomas Tomkins (1572-1656) and Orlando Gibbons (1583-1625). This is a genre that suits The Choir of Westminster Abbey well; they have a clear and direct sound from which emerge some very high quality soloists all underpinned by Robert Quinney's superb organ playing. James O'Donnell paces each anthem beautifully never rushing the transition between the solo and the choir passages and encouraging a thoughtful response to the texts.

In Tomkins' exquisite unaccompanied settings of When David Heard and Then David Mourned the choir invoke a plaintive quality without compromising their clear tone. Possibly these two works are the most beautiful of the performances on this disc; especially stylish is the shaping of '…with his lamentation' in Then David Mourned. Gibbons' O clap your hands draws the disc to a fitting close. Performed here with organ it sounds far more regal than is often heard and is definitely a favourite of mine on this disc.

This album is a pleasing mix of familiar with under-represented composers like Edmund Hooper (c1553-1621) without admitting any music of a noticeably lower interest level. Quinney's organ playing is, as ever, an absolute delight and his programme notes offer a formidable companion to O'Donnell's stylish grasp of this repertoire. On listening to this disc I am struck by the quality of the individual solos which are not only often quite short but also tend to lie quite low in the various voice-ranges, altos particularly. These fleeting verses can often be something of a poisoned chalice for singers, but the gentlemen of the Abbey Choir handle them with an enviable eloquence. It occurs to me that The Choir of Westminster Abbey will soon be broadcast throughout the world as they sing at the next Royal Wedding, this disc assures us that they have never sounded so good.

Posted by Falsettist at 22:04 No comments: