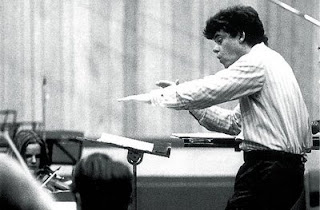 Had he not died in 1976 David Munrow – one of the great pioneering early music specialists and a prolific broadcaster – would have turned 70 this year. And it is a testament to his life and work that he is still remembered widely today.

When LPs were dominant, Munrow was to be found in most record collections. If they were keen listeners then they might have ‘Greensleeves to a Ground’ (1976), if they were specialists ‘The Art of the Netherlands’ (1975) and if they were lighter listeners then they would almost certainly have the music from the hit BBC series The Six Wives of Henry VIII (1970). Indeed, it was through his work with the BBC that Munrow became a household name; his radio series Pied Piper began in 1971: aimed at younger listeners, it was enjoyed by all ages. It ran four times a week for five years racking up an astonishing 655 editions and helped establish him as what the BBC would nowadays call a ‘national treasure’.

Posted by Falsettist at 19:54 No comments: