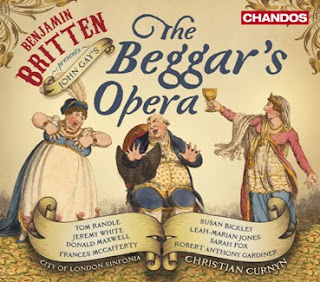 There are so few recordings of Britten's version of The Beggar's Opera that this attractively packaged release on the Chandos label is immediately a very welcome addition. It is also a superb performance as we have come to expect from the Curnyn-Chandos partnership, which has been growing from strength to strength since their release of Handel's Partenope recorded back in 2004.

John Gay (1685-1732) may have made his fortune from The Beggar's Opera but he only wrote the libretto, as this 'ballad opera' cleverly combines spoken dialogue with popular tunes arranged by other musicians including the famous Johann Christoph Pepusch. Having been declined by Drury Lane the work was first performed at John Rich's theatre in Lincoln's Inn Fields on 29th January 1728 and ran for a remarkable sixty-two performances with revivals every season for another seventy years. This unexpected success delighted both John Gay and the impresario, John Rich, leading to the witty observation that the opera made Gay rich and Rich gay. The two men certainly became considerably wealthier as a result of this show and its success was not just confined to London; further performances were given around the United Kingdom and America. Interestingly enough, a revival in 1920 at the Lyric, Hammersmith ran for over a thousand performances in a revised edition by Frederic Austin and Arnold Bennett and many other composers have turned their hand to the music throughout the twentieth century including a new score by Kurt Weill with its famous number 'Mack the Knife'.

Britten's adaptation was not met without some controversy back when the English Opera Group performed his realization in their 1948 season. The overture – attributed to Pepusch – was replaced with one of his own that used tunes linked to the principle characters, and he kept sixty-six of the original sixty-nine airs which was considerably more than the forty-five Austin had chosen back in the 1920s. Britten's arrangements took note of the 'toughness and strangeness' of the original tunes as well as the lyrical qualities that previous arrangements had, in his opinion, over-indulged; and the new orchestration called for flute, piccolo, oboe, cor anglais, clarinet, bassoon, horn, percussion, harp, string quartet and double bass. One critic, Frank Howes, from The Times wrote that 'Some of the tunes get lost in Britten's clever and elaborate settings,' but listening to Curnyn's careful and detailed direction on this new recording it seems to me that the tunes are not lost as such, but simply that Britten's writing is so convincing that it is memory of other arrangements of those tunes that are lost.
Christian Curnyn is, of course, a name firmly associated with Handel's operas but in this recording he shows that his detailed and quick-witted performance style is transferable across the ages. His cast is well chosen too; Peter Pears received some pretty upsetting remarks about his performance as Macheath with implications that he was not manly enough for it, but on this disc Tom Randle oozes both masculinity and naturalness in this character. Susan Bickley is particularly enjoyable as Mrs Peachum (think Peggy Mitchell with attitude) and the Ladies of the Town and Gentlemen of the Road give really spirited performances.

Despite the complexity of some of Britten's realizations I do find that one or two of the soloists tend towards an overly operatic interpretation whereas my own taste favours a more simple and direct manner of singing in music that has after all sprung from folk tunes. This is a balance that both Randle and Bickley achieve very skillfully as does the delightful Frances McCafferty (Mrs Trapes) and it is a tribute to their artistry that they can be so engaging in this difficult medium. Once or twice the spoken parts from some of the other soloists sound a little too close to over-annunciated Radio drama, which is always a problem when one asks opera singers, who have spent many years developing their voices, to try and talk naturally. However, at such points Curnyn keeps the music moving along to prevent the spoken word from stagnating, and throughout the album he brings many of Britten's inspired and beautiful orchestral textures to life in an impressive way.

Gay composed his own epitaph, which sprang to mind several times as I listened to this album: 'Life is a jest and all things show it/I thought so once but now I know it.' Maybe this isn't an opera to be taken too seriously after all. What really matters is that this performance captures a wonderful sense of fun and it is certainly most enjoyable throughout.

Posted by Falsettist at 21:47 No comments: