Every so often a disc comes along which treads a fine line between visionary and baffling and, take it from me, this is an unmissable example. Much of this album demonstrates a cool mastery of conservative performance: several lesser-known chansons are performed from the best editions with a gripping focus on the text. There's a characterful performance of Fama malum, about the spread of evil rumours, and a truly beautiful La Bernardina from lutenists Ivo Haun and Ziv Braha. But my ear was caught by Julien Freymuth, a bright countertenor who spins phrases of fine filigree in Bergerette savoisienne when duetting with the ondes Martenot.

Yes, that's right, an ondes Martenot in Josquin; and elsewhere a Buchler synthesiser and a Fender Rhodes too. Exploring Josquin’s popularity through a Jacques Brelle-meets-Messiaen filter, Thélème present a masterclass in early music arrangement starting from [cue respectful sotto voce] historically informed performance, and quickly blasting beyond its catchment area into another realm altogether – possibly a good way beyond the taste level you might have been expecting – but via an exhilarating trajectory. The aim is to align Josquin with some famous 20th century melancholy and this is achieved with such imaginative conviction that I felt their Mille regretz is best heard walking ruefully through wet Parisian streets at 3am with a Gauloise hanging from my lower lip. Regretz? I've had a few.

Seriously though, Josquin is both venerated in faithful reproduction and honoured by inspiration. The whole album is superb.
[Read the full Gramophone Awards issue here]
Posted by Falsettist at 15:40 No comments: 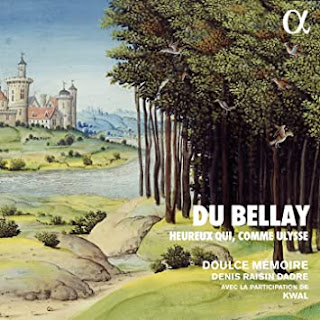 
Settings of Du Bellay's poetry interspersed with recitations by the 'slam' poet Kwal and accompanied by instrumental improvisations, make for an atmospheric and immersive experience. Du Bellay may not have been much set to music but nevertheless the roll call includes Gombert, Lassus and, of course, Arcadelt. The whole programme, varied in emotion and texture, begins with Camile Fritsch's light, fresh soprano in Didier Le Blanc's Qui prestera la parole in which she displays exquisite tenderness as she breaths and sways with the verse. Kwal is also intimate to the point of claustrophobic in his recitations, but I love the mesmeric grain his voice. The pairing of instrumental tracks, too, is clever. Arcadelt's Du temps que j'estois amoureux, dripping with wistfulness is followed by an instrumental performance which although not as warm as the recorders on their previous album [RIC392] nonetheless offers an emotional breathing space.
[...]
To read the full text of this review please visit www.gramophone.co.uk (Awards 2022)
Posted by Falsettist at 15:43 No comments: