The English Stage Jig: Musical comedies from the 16th and 17th centuries 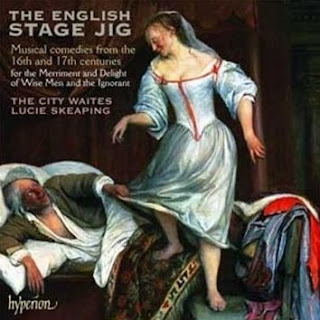 Lucie Skeaping and The City Waites deliver imaginative and interesting programmes that shed light on otherwise little-known English music-making practices from the sixteenth and seventeenth centuries; this one is no exception. Many people, myself included, would immediately associate Jigs with dances but this programme reminds us that the term is wider than that and came to describe a form of after-show entertainment at the theatre – a comic chaser to the main event. Jigs were quite frequently rude, salacious and smutty and it was often just for this short entertainment that crowds were drawn to the theatre. A good Jig could prop up an unsuccessful play.

As with so much of this informal music, it was founded upon oral and folk traditions, so where the dialogue or lyrics have been written down, music notation generally has not. Despite the lack of manuscript sources Jigs achieved a huge popularity in their day, much to the chagrin of Ben Johnson who felt that they drew too much attention away from serious plays. Due to the troublemakers such bawdy antics attracted, by the seventeenth century attempts were made to suppress the Jig, but these were short-lived since there was something of a public outcry and London's Southbank remained the centre for this entertainment both in the theatres and in booths set up along the riverside. This is, of course, just the sort of repertoire in which The City Waites excel; cheeky, witty and full of funny accents. But underpinning their huge sense of fun is some pretty impressive research leading to thoughtful reconstructions. Problematically, Jigs were set to the popular tunes of their day and so the name of the tune often doesn't get mentioned, leading Skeaping to search for clues in the surviving texts to identify which the tune might have been used where. It's not always an easy job and the resulting album is as much a tribute to her impressive knowledge of the period as it is to the fine performances.

Central to this form of entertainment was the comic figure of Bumpkin, an accidental hero usually with a thick regional accent or dialect and on the receiving end of the audience's mockery. This character is played hilariously well by Thomas Padden in the first Jig 'The Black Man' so much so that this disc almost spills over from a musical entertainment into a full blown radio drama at some points. There is also often what can best be described as a 'busty wench' usually chased by at least one of the male characters and/or being unfaithful to her husband. Skeaping herself is unsurpassed in this role. And indeed it is down to the performers to really make this music work – it's not about standing and delivering a beautiful sound (although they can do that too), it's really a bit more about acting and acting-up while the instruments, unruffled in the background, chase the singers around the score.

All of the Jigs are performed with an obvious glee but the one that really caught my attention was the shortest – 'The Bloody Battle at Billingsgate' – which pits two Fish-Women (Catherine Bott and Lucie Skeaping) against each other in a slanging match. What impresses me most about these performances is the quality of the extra vocal effect, the sighs, the coughs, the laughing; all are such an integral part of the performance that one is really drawn in – just like a good drama – and despite best intentions to listen po-faced, inevitably one starts giggling along. The only drawback, if indeed it is one, is that having a number of Jigs in a row like this is too manic for a single listening, that would be rather like trying to watch several episodes of Faulty Towers in a row. This is definitely a disc to keep in your car for frustrating traffic-jams or other such moments when a little hilarity would be the perfect tonic. After all, who wouldn't be cheered at the prospect of hearing Catherine Bott and Lucie Skeaping scratching each others eyes out. Laugh? I couldn't stop.