Cupertinos: a passion for Portuguese polyphony 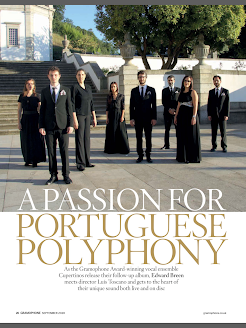 ‘It was a great pleasure to meet Luís Toscano and to hear the Cupertinos live at Cadogan Hall last February,’ says Edward Breen, author of this month’s feature on the vocal ensemble. ‘Their charismatic performances inspired me to embark on a lockdown listening odyssey of Portuguese polyphony.’

It’s not called a golden age for nothing: the polyphony of renaissance Portugal is deeply expressive and shares a richly extended post-Palestrina lexicon with its Spanish counterparts. On occasion it also features well controlled wafts of chromaticism echoing Gesualdo and his kind. So, if you are new to this music don’t let anyone sell you a story of minor masters, Portugal has serious talent. Furthermore, due to a sixty-year Spanish rule (1580–1640) Portugal’s golden age often described as pan-Iberian at least until the restoration of their monarchy with King John IV, João o Restaurador. To be sure King Philip of Spain had supported the Portuguese musicians during his rule, but it is through a Byrd-esque concentration on texts describing the destruction of Jerusalem and captivity under foreign rule that we detect a yearning for independence being communicated by these artists, so the history of the music is also fascinating.
[...]

To read the full text of this article please visit www.gramophone.co.uk (Sept 2020)