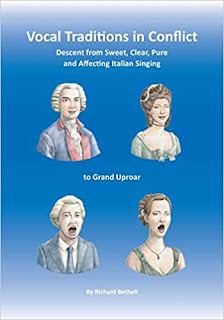 ‘Whatever we know or don’t know about 13th century singing and, God knows, there’s very little we can say for certain about it, we may be certain that it didn’t sound like 20th century singing.’ The words of Michael Morrow, director of Musica Reservata, one of the first early-music ensembles to experiment with vocal sound and style. He worked with many musicians who would go on to define early-music performance in the last quarter of the twentieth century: Andrew Parrott, Anthony Rooley, Christopher Page, and the sounds that he asked of singer Jantina Noorman would go on to influence many later performers such as Dominique Visse.
The author of this new volume about vocal traditions, and vocal vibrato – Richard Bethell – is another Musica Reservata alumnus who, alongside a business career, has remained a recognisable figure within British early-music circles as Secretary of the National Early Music Association (NEMA). In 2009 he helped organise a conference at York University on ‘Singing music from 1500 to 1900’ at which he presented on vocal vibrato. In many ways this book is rooted in Morrow’s ideas: it seeks to look beyond modern performance norms.
[...]
https://www.earlymusic.info/Performer.php
https://www.facebook.com/EarlyMusicPerformer
Posted by Falsettist at 13:16