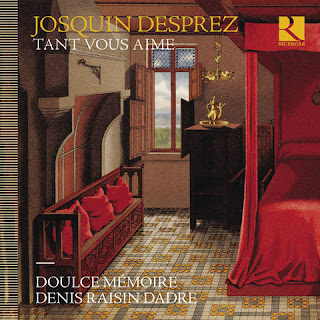 
Josquin has long been established as a preeminent oltremontani, that is a northern European composer who crossed over the mountains into Italy. Recent scholarship, however, suggests he spent much more time on his original side of the alps than was initially thought. This new album from Doulce Mémoire - the first since their unforgettably superb Leonardo da Vinci: la musique secrète (Alpha 2019) - largely explores songs from Josquin's French years. Furthermore, Denis Raisin Dadre has searched original folk anthologies to restore missing verses to several works, notably Tant vous aime. In another instance he has matched the poem Une jeune fillete to the Josquin's Comment peult avoir joye.

Amongst the small group of Italian songs that are represented here, I particularly enjoyed both Compere and Josquin's settings of the popular song Scaramella. The instrumental playing in Compere's version is snappy and precise, but I prefer a vocal top-line such as with the Orlando consort (MET CD 1002). Josquin's Scaramella is performed with a Munrow-esque verve (c.f The Art of the Netherlands, EMI, 1976) but his infamous El Grillo (The cricket) I enjoyed less for its forced jollity. There's so much to explore here, especially among the French songs, and it’s supported by a superbly informative note by David Fallows. This could be one of my favourite secular Josquin discs in recent years.
To read the full text of this review please visit www.gramophone.co.uk (July 2022)
Posted by Falsettist at 15:55