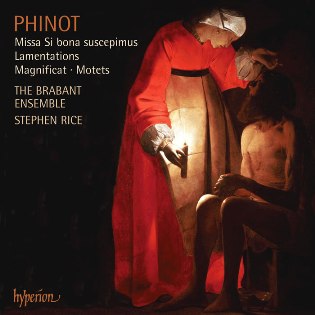 This new album from The Brabant Ensemble is a powerful reminder that there are still considerable quantities of early sixteenth-century music to be explored. Much of it is of a very high quality indeed which suggests that we may have become too reliant on a core repertoire, an 'early music canon' that quenches our thirst for new discoveries. Have we, en masse, really lost our inquisitiveness? Thankfully there are a handful of ensembles that have not; and one of those is The Brabant Ensemble directed by Stephen Rice.

Dominique Phinot (c.1510-1561) probably slipped through the musicological net due to the paucity of his surviving biographical information. A musician in the service of Duke Guidobaldo II of Ubino and later cantor at the cathedral in Pesaro, there is little else known apart from a suggestion that he was executed for homosexual practices shortly before 1561. Nevertheless, he is rated highly by the contemporary theorist Hermann Finck who thought him a close second to Gombert. Phinot's general renown as a composer is well justified in this beautiful programme of his works which includes a mass, double-choir motets and a fantastic set of Lamentations.

The album opens with Sermisy's motet Si bona suscepimus which although slightly archaic for its time is a clear derivative of the Josquin school, with a sectional structure and homophonic textures that emphasize portions the text. Harmonically there are some pleasingly exotic moments that survive the transition into Phinot's Missa Si Bona suscepimus. This mass setting largely dispenses with Sermisy's overt sectionalization in favour of developing the model to include longer meslismatic phrases and the increased possibility for changes of mood.

The real eye-opener, however, is Phinot's motet Pater peccavi which tells the story of the prodigal son. Not only is it an absolutely gorgeous piece of music but it is one for the early music buffs as the application of musica ficta leads the singers into deliciously tortured territory during the second half. It was the scholar Edwin Lowinsky who first proposed the idea of a 'secret chromatic art' - later developed by Margaret Bent into a theory of 'contrapuntal descent' - whereby a flat is introduced by one of the singers in order to avoid a certain interval which can, in some cases, lead to a chain reaction of further flats accruing until the piece spirals down a whole semitone as every note is flattened. This is just what happens here when the prodigal son complains ('hic fame pereo…'). The Brabant ensemble manage this tricky device very well and ensure that this recording will be an important contribution to the debates surrounding such theories.

Overall I enjoy the blended sound that the singers make, there is plenty of clarity in the textures with an even balance between the voices and skilful transitions between the passages of plainsong and polyphony when they occur. There are, however, several moments when I feel that the music demands a more overtly expressive character – particularly in Pater peccavi where some of the dissonances could benefit from sounding slightly less 'efficient'. As highly skilled and technically able young singers The Brabant Ensemble sometimes forget to match Phinot's use of harmonic 'pain' with a little expressivity of their own. This is a matter of taste of course and their album, as it stands, is delightfully sung and sure to please many listeners, but for my tastes it is just a little too polite at points of passionate musical statements.

The Brabant Ensemble and Stephen Rice have carved themselves a distinct niche in the discovery of forgotten masters and I hope these discoveries keep coming. Future plans include a recording of music by Pierre Moulu which I, for one, will be eagerly awaiting. In many ways this is the cutting edge of early music.