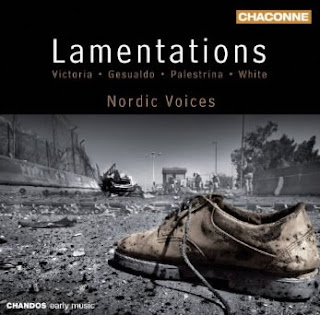 The six-voice a cappella vocal ensemble, Nordic Voices, was formed a little over ten years ago to specialize in both Renaissance and Contemporary music. In this, their fifth album, they present a moving programme of renaissance Lamentations. These are settings of Old Testament verses written by the prophet Jeremiah as he witnessed the destruction of Jerusalem and the fall of Judah in 586 B.C. and, as Nordic Voices highlight in their booklet, are still of relevance today as they chart the horrors that humans are capable of inflicting on one another.

This whole album is beautifully conceived and presented with its message made clear by the stark cover-image of the aftermath of a vehicle bomb at a Baghdad checkpoint in 2004. Keen to remind us that amidst all this suffering there are rays of hope, Nordic Voices donate a portion of their royalties from the sales of their disc to UNICEF 'to help achieve a better existence' for children innocently caught in today's conflicts.

Many of the major Renaissance composers who wrote for the Catholic Church composed at least one set of Tenebrae lamentations and this programme offers a diverse selection of works by Victoria, White, Palestrina and Gesualdo. Vocally, this is demanding territory; their use at the night-time office of matins (known as Tenebrae – literally 'darkness') coupled with the expressivity of the texts has tended to inspire exceptionally dark and torturous musical textures which can be hard to sustain over a whole programme. The Hebrew lamentations were originally an acrostic but this device did not survive into their Latin translations so instead the Hebrew letters are spelled out, usually in long melismatic phrases that offer brief respite from the harrowing text of the lamentations themselves. Nordic Voices manage the moments of repose very well so that when the music becomes more pleading the effect is heightened.

It is rather enlightening to hear Nordic Voices sing this repertoire so well. For so long recordings of renaissance vocal works have been dominated by the English choral scene (and similar continental groups) that they have become fixed in a very particular sound-word. Whilst Nordic Voices are not so very different from the English style, subtle differences in pronunciation affect the overall texture by bringing a new palette of colours to familiar harmonies and a very brilliant sheen to their tuning. Whilst their blend is clearly aided by the generous acoustic, it can sometimes lead to muddy textures between tenor and baritone voices – this is a balance that many groups ensembles struggle to find and I prefer this 'live' side of the fence to the alternative dry acoustic. All of the singers are very expressive and clearly have formidable techniques, something that is especially noticeable with the sopranos Tone Elisabeth Braaten and Ingrid Hanken who manage Robert White's high tessitura with ease. I also like the solid low-notes from bass Njål Sparbo which underpin the performances and lend an important sense of gravitas to some of the more difficult passages in Gesualdo's Tenebrae factae sunt, for instance. This is actually one of the most convincing recordings of his work that I have heard.

With the combination of thoughtful programming and skilful singing Nordic Voices remind us that these Lamentations have a relevant message in today's world. Using lamentations to signify hope in this way not only makes for a beautiful album but also gives us listeners much to think about.