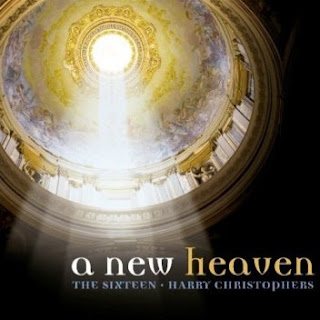 Throughout their first thirty years The Sixteen have remained faithful to a core repertoire of early music with various other explorations along the way and this new album is another one of their delightful excursions, this time focusing on the music of the Anglican church from Victorian times to the present day.

The programme itself is rather ingenious as it covers a time when the Anglican church enjoyed its long (and last?) relatively stable period as a major progenitor and patron of the arts in England. Starting with Parry's famous setting of Psalm 122 I was glad (performed here without the famous royal acclimations) written for the 1902 coronation of Edward VII, The Sixteen trace a line through the tranquility of those compositions that were unruffled by the persuasive march of modernism, such as Stanford's much-loved Beati quorum via and Balfour Gardiner's rather indulgent Evening Hymn to present-day settings of The Lord is my shepherd by Howard Goodall and John Rutter. It is a fantastic idea and makes for a wonderfully nostalgic programme of traditional works that is as evocative of evensong as it is thought-provoking. Surely these composers working within the Anglican tradition, developing and passing on their skills have been rather under-represented and maybe even slightly eclipsed by the coincidence of the early music revival with the rise of the recording industry? Of course these pieces are well covered by cathedral and Oxbridge choirs but it is pleasing to see a major label such as Decca present such a well-packaged and well-performed album of our recent choral heritage.

This is a bigger, richer and, dare I say it, more romantic Sixteen than we usually hear and it really suits this music. Of course, Harry Christophers' singers all have extensive experience of the Christian choral tradition but what is especially poignant is the sheer range of vocal colours that the sound of adult female voices offer, since we are mostly used to hearing boys sing the treble lines. In particular the beginning of Faire is the heaven (Harris) is delightfully paced and Harry Christophers demonstrates his keen affinity with the choral medium, and I was also deeply impressed with Evening Hymn (Balfour Gardiner) which can, in other hands, too often get lost amidst its own stodginess but here retains a clear text and musical direction without loosing any of its passion. Listen out for the great alto sound at the beginning of the 'Amen'.

The one difficulty I have with this album is with the settings of The Lord is my Shepherd in this programme. I agree that John Rutter, in particular, is an important living composer and I do appreciate the implicit suggestion that he carries on a choral tradition inherited from the late Victorians, but he feels like a bit of an afterthought stuck at the end of the disc like this, whilst Howard Goodall takes the centre of the programme. Personally I would have either swapped Goodall for Finzi or used a more chronological approach to make more historical sense.

Classical-music aficionados should not sneer at the obvious whiff of Katherine Jenkins-style marketing that Decca have given this album because underneath the slick exterior these performances have real musical integrity. Christophers breathes new life into pieces that have for too long been ossified in memories of uncomfortable pews and smells of wood polish. His ensemble, The Sixteen, are as always outstanding.