Not no faceless Angel — Choral music by Gabriel Jackson 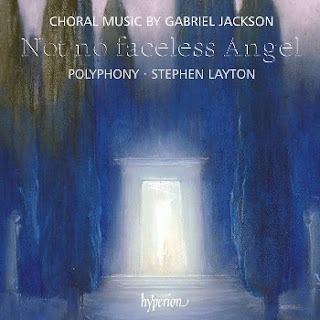 Stephen Layton and his choir Polyphony have been performing and recording new choral works for several years now and this latest album of music by Gabriel Jackson can be seen as another installment in an inspired series which has included composers such as Thomas Adès, James MacMillan, Morten Lauridsen, Arvo Pärt, Eric Whitacre and, of course, John Tavener. Anyone who has heard this choir will know that their singing is quite simply sublime, so much so that the Daily Telegraph has already described them as 'one of the best small choirs now before the public'.

Similarly, Gabriel Jackson (b. 1962) has been steadily building his reputation over the past 20 years as a leading choral composer, even though his works are not limited to that medium by any means. A quick survey of his music shows a preoccupation with religious themes although in his sleeve-notes Stephen Johnson uses the famous description of Ralph Vaughn Williams as 'the Christian agnostic' as a way to deflect from overt Christianity and introduce Jackson's concept of 'private epiphanies'; by which he means those moments which give us insight to that which is beyond our comprehension. Aside from the tradition of religion there is an obvious preoccupation with the tradition of music itself – indeed one could say that of any composer – but Jackson is as likely to adapt compositional techniques from mediaeval and renaissance music-theory as he is to absorb the atmosphere of the Russian orthodox tradition or the rhythmic vitality of Stravinsky.

The programme opens with two songs in English – a setting of Blake's To Morning (2007) and Song (I gaze upon you) (1996) both displaying an unerring gift for the natural rhythms of language, resulting in delightfully unhurried miniatures that should suit any competent chamber choir. Cecilia Virgo (2000) is representative of Jackson's fondness for Tudor church music and draws on influences from Tallis' 'Spem in alium' and works by Browne and Carver, to name but a few. Here, deeply sonorous textures are spiced with delicate soprano details and one of the most arrestingly beautiful openings to a motet that I have heard in a long time. Polyphony sing it so well that, for a moment, one really couldn't imagine wanting to hear this piece any other way.

Rhythm is also a preoccupation of Jackson's as is the clever use of compositional devices gleaned from the Netherlanders-school which often surface in his works. In the following Orbis patrator optime (2006) the broken melismas somehow link ideas from composers such as Obrecht and Stravinsky creating a gorgeous effect, bordering on transcendental. But this meditative atmosphere reaches a zenith in the title-work of this album, a setting of a poem by Tanya Lake, Not no faceless Angel (2006), which deals with the big themes of loss and bereavement; here Jackson is at his most explicit, using his music to explain and to comfort when the words can go no further. The addition of instrumental timbres (cello and flute) in this piece seem especially poignant at the mid-point of the programme.

My favourite works, however, have to be the final two settings of Salve Regina. The first (2000) is only five minutes long and contains a beautiful soprano solo sung here by Laura Oldfield and then Salve Regina 2 (2004), which was written to celebrate the 850th anniversary of the foundation of Beaulieu Abbey. Here various strands of Jackson's style are brought together: Stravinsky in the rhythm and early music-theory in a skilful double-gimel for the upper voices. This is Jackson at his most fluid and Polyphony deliver an intelligent and gripping musical performance at a very high standard.

This sublime album comes highly recommended and the performances are another triumph for Polyphony and Stephen Layton.