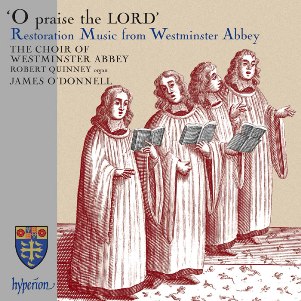 When musicians with such a rich history as that of The Choir of Westminster Abbey choose to research and record their musical inheritance, we can be pretty certain such a project will be both exciting and illuminating. That this disc has also been fuelled, one suspects, by some impressively thorough musicological investigations makes for a satisfying and beautifully presented programme.
This album, O praise the Lord, is billed as 'a day in the life of the choir around the time of the English Restoration', and indeed it follows the music of services throughout the Abbey's day, including two psalm-settings in 'Anglican chant' when it was still in early development. Cleverly, the music chosen can be either traced to the Abbey (as appearing in the Abbey Library) or is likely to have been sung by the Abbey choir at the time. The exceptions to this are, of course, the Latin works, which would have been for domestic performance, or at least billed as such. Having already recorded Byrd's 'Great Service' and more recently an album which explored both traditional and reformed religion (Mary & Elizabeth at Westminster Abbey: 'Sisters in hope of the Resurrection') to great acclaim, we might be forgiven for thinking that Restoration music from almost forgotten figures such as William Child would be thin gruel in comparison. But this – at least in these performances – is not the case at all. James O'Donnell finds a grandeur and sincerity in this music that is often overlooked during the hastily sight-read liturgical-performances that take place around our country every day. And even if the promise of well-sung William Child does not convince you, there is always the towering figure of Henry Purcell, whom The Choir of Westminster Abbey sing so well, to catch your attention.

Starting with Purcell, there are many recordings of his music of course, but the canticles from his Complete service in B flat sound really fresh when sung by this famous choir. Recent recordings by Westminster Abbey choir have been noted (in my book at least) for the clarity of their diction and their ability to make the English language sound musical, something that many performers have tried to do with varying degrees of success. The effort needed to crisply annunciate lines like 'Lord, now lettest thou thy servant depart in peace' can really kill the thread of a musical line when executed too pedantically, but this choir get it just right and as a consequence these canticles are rarely sung better than here.

But, however well the choir sing, there is a noticeable difference between music that is Purcell's and that which is not, since no amount of keen musicianship can smooth over the gap between this towering genius and his contemporaries, although I admire the choir for trying so hard. Having said that, particularly worthy of note is some of the music by John Blow. There are delightful verse sections in 'God is our hope and strength', which are sung beautifully, as is the ravishing 'Salvator mundi, salva nos'. And special mention is due for their beautiful psalm-singing. Anglican chant doesn't always work very well out of context – it can often sound quite pedestrian on CD – but here these short tracks are alive with intelligent use of language. It is particularly refreshing to note that The Choir of Westminster Abbey do not subscribe to the fashionable practice of over-egged Italianate pronunciation that one hears so often on 'choral evensong'. I'm pleased to report there isn't a single 'keeeng' or 'seeng' in the 'Venite'.

The solo organ music is played with great panache by Robert Quinney, although unfortunately the notes do not tell us what on. Purcell's organ would not have been the Harrison and Harrison instrument that currently occupies the building but rather a single manual instrument situated in the choir. Presumably something similar is used on this disc, and, whatever it is, it is certainly beautiful and has a pleasing 'chiff' that provides something of a parallel to the crispness of the choir.

This music is part of the choir's living tradition, and while we ought not to confuse that with any automatic claims of special insight on their part, James O'Donnell and his singers have much to teach us about a performance style which projects clearly in the Abbey building, and this, at the very least, is very valuable information to anyone interested in historical performance practice. It's great to hear boys' voices in this quintessentially English music. Choral singing is constantly evolving – thank goodness – and even though I am a great supporter of female voices in our Church and Cathedral choirs, there is something particularly evocative about the treble sound that this album captures completely, and it is wonderful to know that this tradition continues to flourish alongside the new mixed choirs. This is a really beautiful album from some of our most famous choral musicians, and I highly recommend it.