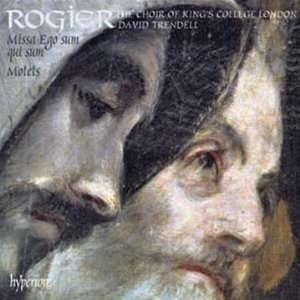 There are still surprisingly few recordings available of music by Philipe Rogier so a new release, especially one of such high quality as this, is particularly welcome. On this disc, their first for Hyperion, The Choir of King's College London directed by David Trendell present Rogier's magnificent parody mass in a release well-timed for the Eastertide season.

It may sound flippant to say that Rogier (c.1561-1596) was typical of his age, but it was not that unexpected for a Flemmish priest and composer to enjoy the patronage of the pious Philip II, since his Spanish Court maintained a chapel of Flemish musicians that had been established during the reign of Charles II. Rogier had not, however, been introduced to the Court as an established composer, but rather as a choirboy under an earlier maestro de capilla, Geert van Turnhout; so it seems he simply remained in Spain's service for the rest of his short life. As a result, his music absorbed many of the influences we associate with his Spanish contemporaries such as Christóbal de Morales and Francisco Guerrero, but it also displays a mastery of the Flemish style developed by composers such as Clemens non Papa and Nicolas Gombert. For such an accomplished composer whose music, according to sources as diverse as the English composer Thomas Morley and the Spanish poet Lope de Vega, seems to have been influential on many other major figures of his time, it feels uncomfortable to dismiss Rogier as a minor master. This disc is one that may do much to revise our opinion of this overlooked artist.

Missa Ego sum qui sum is based on an Eastertide motet by Gombert (worth hearing on a recording by Philip Cave's ensemble Magnificat: Linn records) yet Rogier takes this motet more as inspiration than as a strict framework for dogged reference. His overwhelmingly fluent use of imitation and expressive dissonance leads Trendell to suggest that 'it must rank as one of the finest settings of the Mass ordinary of the late sixteenth century', and after hearing this disc I couldn't agree more. The Choir of King's College London clearly has a healthy appetite for this music and a firm grasp of its imitative style. As a choir, rather than a smaller ensemble, their overall tone is softer-edged than the recording by Magnificat, and as such one can hear that they have to work harder to bring clarity and attention to heightened moments in the vocal lines. Having said that, the pay-off from a choral performance such as this is that the vertical harmonies are more effortlessly explored, and longer-range harmonic features become more apparent.

Interesting parallels with Montiverdi's Missa In Illo tempore are highlighted by Trendell in his notes to the recording (these are on Hyperion's website if you prefer to download), and in particular he mentions the spiraling harmonic sequences at the end of all movements apart from the Sanctus. This is not unlike Monteverdi's own ravishing Christe eleison setting which lends further weight to the argument that Rogier was much more influential than has previously been suspected. Such moments are good examples of the benefits of a choral performance and also a neat illustration of how thoughtfully prepared this recording has been. It's so easy simply to present late sixteenth century polyphony in one big mellifluous serving, but the attention to detail in this performance really shows how expressive and impassioned Rogier's music can be and how his compositional ideas are conceived in the larger-scale movements. The addition of The English Cornett and Sackbut Ensemble in the first and last motets creates a pleasing frame for this programme and brings a richness and grandeur to the music. Just listen to the exquisite setting of 'aurum, thus et myrrham' in Videntes stellam, where both the singers and instrumentalists show how incredibly stylish they can be.

Overall I love this choir's sound. It's warm and expressive and there is enough individuality in the voices to keep the sound alive and continually interesting. Once or twice at some of Rogier's unexpected dissonant twists I wondered if they could have leant further into the suspensions that are created but on the whole Trendell makes the right decision not to over-play these features – as the old adage says: less is more.

Of course, when presented with a disc of music as good as this we are left wondering why there are so few devoted to Rogier's music? I suspect the answer is that early music has unwittingly created a canon of works that are endlessly recorded, serving as benchmarks on which new ensembles are expected to cut their teeth. This is a vexing situation since early music once sought to escape just such a canon of 'classical' works that dominated the mid twentieth century; so how did it end up promoting a whole new canon of its own? Could it be that we listeners are unadventurous in our purchasing habits or that choirs find it easier to give us yet another Byrd Ave Verum rather than venture into new territory? Either way, we should be enormously grateful to David Trendell for bringing Rogier's music to our attention as the programme and the performances he has directed are utterly compelling and make a handsome addition to the recorded repertoire available.