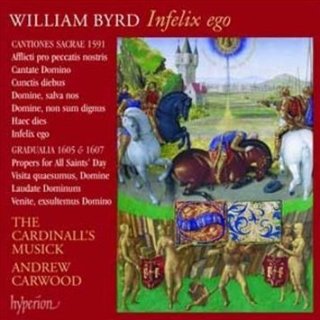 The Byrd Edition finally comes to an end with this highly impassioned volume that closes with a long-awaited recording of Infelix ego. Regular readers will know that I have been extremely enthusiastic about this entire recording-project which I see as important both for understanding the magnitude of Byrd's compositional achievements and for the way that The Cardinall's Musick have established new expressive possibilities in early choral singing. In short, the importance of The Byrd Edition is not to be underestimated and this last volume is certainly a desert-island disc if ever there was one.

The Gradualia is an astonishing achievement and throughout The Byrd Edition, Andrew Carwood has presented the work in liturgically appropriate combinations that, due to the 'modular' nature of its conception, lead to some repetition of short movements. The Propers for The Feast of All Saints, performed on this disc are intriguingly scored for SSATB and the double soprano parts, sung so beautifully by Carys Lane and Rebecca Outram, lend a lighter and, dare I say it, more hopeful tone than we hear in the Cantiones Sacrae pieces.

However, the fact that these Propers appear at the end of the five-part fascicle of the Gradualia (1605) is interesting because before them comes what Philip Brett once famously described as 'a non-liturgical zone', which he thought was there to reassure people that the collection did not 'represent acquiescence or resignation to the political situation facing Roman Catholics in Protestant England', indicating strongly that any hopeful tone we detect conveys something of Byrd's spectacular defiance rather than a settling down in later life. For example, listen for the way the tenor part climbs high in Timete Dominum on the words 'onerati estis' (you who are burdened) and the flurry of music that immediately follows on 'et ego reficiam vos' (and I will refresh you). It's an astonishing setting and a wonderfully intelligent performance. The upper voices cleverly phrase 'onmis laboratis' (all ye who labour) in preparation for this sequence of musical events, which indicate their deep understanding of the significance that this text had to Byrd and his recusant friends.

Placing works from the Cantiones Sacrae of 1591 either side of these Propers allows Carwood to exploit the full potential of his remarkable singers as they move between what are often quite different styles. Both collections are intellectually demanding, as Byrd never ceases to set not only the text in hand but also the thoughts behind it and their significance to his target audience. And Byrd takes his music to some extrovert places that often make significant vocal demands on singers of the Cantiones Sacrae. Such demands make Alan Brown's reasoning that both the Cantiones Sacrae of 1589 and 1591 are vocal chamber music collections that were sung in the same context as madrigals seem even more convincing, especially as we hear these powerful performances on this disc.
Even Haec dies, well known to every chorister from its inclusion in the famous Oxford Book of Tudor Anthems, is sung will deep consideration. In 1601 it was reported that Mark Bosworth sung this text 'with a joyful accent' at the gallows. His was a double execution, and the other condemned man, Roger Filcock, is said to have joined him 'in the same tone' at 'Et laetemur in ea'. What better setting than Byrd's outrageously joyful music to demonstrate that the Catholic spirit would not be quashed? I feel that something of this history comes through in Carwood's interpretation, as impossible to quantify as that may seem.

Reflecting on the changes in the way that renaissance polyphony has been performed over the last forty years, it seemed to me that there was a time, post-Munrow, when the early music movement was characterised by a desire to refuse things. By saying no to vibrato, portamento, big dynamic changes and overtly text-based approaches, performers hoped that they might get closer to the 'music itself'. Certainly, stripping polyphonic textures back to their bare scaffolding was an instructive phase for both the performers and listeners but as the philosopher and aesthete Theodor Adorno said back in the 60s, 'Objectivity is not left over once the subject is extracted.' Even so, the once ubiquitous clinical urtext-style of performance has repeatedly proved highly marketable and, paradoxically, extremely moving.

Throughout the 80s and 90s ensembles such as The Tallis Scholars (building on earlier work by Sir David Wilcox and David Wulstan) regaled us with performances of great delicacy which were not unlike Glenn Gould's Bach; the inner voices of musical textures being revealed through a clarity and luminosity of performance. Such performances did much to rescue choral music from the heavy sound that 60s performers like The Prague Madrigal Singers had once published. Somewhere along the line audiences voted with their feet and light, agile (Oxbridge) voices were found to be most favoured for this repertoire. Yet despite an influx of 'purity' to the music, emotion was never fully suppressed; The Hilliard Ensemble, expressive and instantly recognisable, have always brought a noticeably involved approach to their performances as have The Choir of Westminster Cathedral and now, finally, with The Cardinall's Musick one feels that a larger sea-change in performance practice may well be afoot.

Such expressivity in Byrd is not entirely new of course, The Cantiones Sacrae have inspired fine performances in the past – I'm thinking of New College Choir, Oxford in '83 and '86 in particular, but this latest release is surely the best available to date. The Cardinall's Musick have utterly convinced me of Byrd's genius and it is astonishing to think that a full exploration of his Latin church music was never attempted before.

Particular highlights from the series – for those new to this collection – would be volume three which ended with Philippe de Monte's setting of 'Super flumina Babylonis' and Byrd's 'Quomodo cantabimus' and just about all of volume ten (Laudibus in Sanctis), which was utterly sublime. Now we must add the present volume and its powerful performance of Infelix ego to that list. My only concern is that the older volumes on ASV may become harder to obtain now that the later volumes have moved to Hyperion. It remains to be seen what sort of arrangement can be organised between record companies; will there ever be the one boxed-set or will it forever be Byrd-part-the-first, and Byrd-part-the-second?