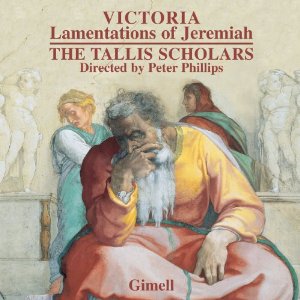 Back in 1990 when The Tallis Scholars were celebrating Gimell's tenth birthday, David Fallows wrote of their first disc 'It is hard to think of a record label having had a more auspicious debut or one that so clearly forecast what was to come over the next decade, in terms of both repertory and performance quality'. Their combination of ultra-refined and disciplined singing has had an enormous effect on the way polyphony has been sung for 30 years, and it's a great pleasure to see that their influence and excellence shows no sign of waning. David Fallows' comments are just as pertinent today as they were twenty years ago.

Of course, this past year or so cannot have been an easy period for The Tallis Scholars. The untimely death of Tessa Bonner robbed them of one of the most individual voices in early music and a much-loved and respected colleague. But such is the strength of Peter Phillips' vision that his ensemble has quickly evolved to continue their work with new voices, and this disc lives up to the high standards we have come to expect. I have mentioned before when reviewing The Cambridge Singers that the combination of sopranos Amy Haworth and Amy Moore is a particularly delightful one, and here they are joined by Amanda Morrison and long-time 'Tallis Scholar' Janet Coxwell to create the bright soprano sound for which The Tallis Scholars are noted.

At first glance it seems an odd choice for an ensemble renowned for their 'purity' and 'clarity' to take such an interest in Spanish polyphony. As Phillips says right at the beginning of his notes, 'The Spanishness of Spanish polyphony is often evoked', and The Tallis Scholars performing style could not be further away from the fiery emotions we often associate with the Iberian Peninsula. I suspect that the tempestuous reputation we attribute to Victoria in particular spans from several earlier and influential recordings, chiefly, Westminster Cathedral's hair-raising 1960 recording of the Responsories for Tebebrae (also from 'Officium Hebdomadae Sanctae') directed by George Malcolm. A long tradition of singing Victoria at Westminster Cathedral still thrives, and shades of their steely continental tone have continued to dictate a gutsy style that many others have tried to copy. The Tallis Scholars, however, are one of the few groups to remain pretty much immune from the temptation to make such music more beefy than the Italian or Flemmish schools, and I for one am grateful for the contrast they bring to this repertoire.

Excelling in the exquisite delicacy of Victoria's upper-voiced sections, there is something radiant about the way this whole disc is performed. Rather than being sung at, we are invited to eavesdrop on a very intimate and refined sound world that is rarely heard in settings of these famous Lamentation texts. Peter Phillips eschews obvious dynamic surges in the darker verses and maintains delicate phrasing at all times. Intensity is never lost, but neither is it forced. His interpretation is true to the original battle cry of the early music revival: letting the music speak for itself. Without the thickness of interpretation that choirs often bring to Victoria, his Italian qualities come to the fore and one can hear, quite starkly, what a debt his music owes to Palestrina.

Despite the obvious beauty of this disc I do find it slightly too cool at certain points. Phillips makes such subtle distinctions between the letters and the verses, for instance, that they are, at times, hard to spot. And whilst the resulting performance is infinitely listenable and engaging, it does lack a feeling of religious commitment. This is, of course, a matter of taste. Peter Phillips likes it subtle, and I like it more deeply penitential. Either way – this is a fantastic recording.